JAMB reviews claims of biometric challenges in the 2020 UTME

The Joint Admissions and Matriculation Board (JAMB) has held a retreat to review the various cases of candidates who were unable to be biometrically verified during the conduct of the 2020 Unified Tertiary Matriculation Examination (UTME) to unravel the circumstances leading to the ugly development, the Board had set up a committee of experts toscientifically verify the various claims. The verification exercise was conducted at the University af Ilorin.

The Board had earlier conducted a manual verification exercise out of which a reasonable number of the candidates were identified as fraudsters. However given the sensitive nature of the issue and being a responsive organisation, the Board further engaged professionals in the area of biometric technology to holistically review the candidates’ claims. The exercise, which revealed the many antics of candidates to circumvent the watertight security process put in place by the Board, confirmed the result of the manual exercise with more candidates discovered to have engaged in acts inimical to the conduct of the examination. 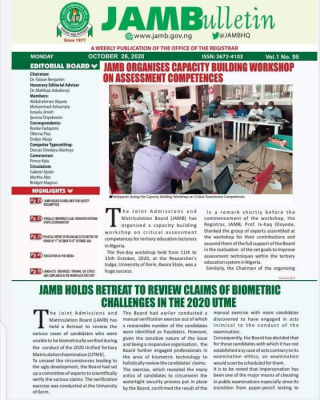 Consequently, the Board has decided that for those candidates with which it has not established any case of acts contrary to its examination ethics, an examination would soon be scheduled for them. t is to be noted that impersonation has been one of the major means of cheating in public examinations especially since its transition from paper-pencil testing to